Lebanon – the failed state: how politics and policy shapes population health and wellbeing 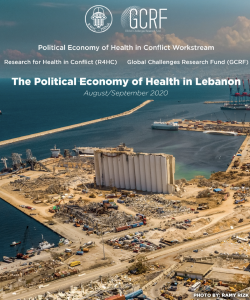 The research for this report was undertaken by the Political Economy of Health team which includes:

Lebanon – the failed state: how politics and policy shapes population health and wellbeing

“In our age there is no such thing as ‘keeping out of politics. All issues are political issues, and politics itself is a mass of lies, evasions, folly, hatred and schizophrenia.” (George Orwell, All Art is Propaganda: Critical Essays)

The massive explosion in Beirut, Lebanon on a sunny Tuesday afternoon in August laid bare how politics determines the health and wellbeing of Lebanese citizens. Years of state neglect and rent seeking political decisions led to more 300,000 people being left homeless, over 6,000 seriously injured and 190 dead.[1] The Beirut Blast arrived on top of a COVID-19 induced public health crisis, a protracted humanitarian disaster, years of environmental degradation, currency devaluation and an economic meltdown. All of this has impoverished millions of Lebanese as well as 1.2 million Syrian refugees who sought sanctuary in the country. One million Lebanese now live below the World Bank poverty line, half the country has no health insurance and a third of the nation have lost their jobs due to decades of economic mismanagement and corruption within government and public services.[2]

Since the end of the Civil War, Lebanon has been portrayed by the media, academics, Lebanese politicians and international diplomats as a modern and progressive country, where the food is world class, different religions live in harmony and whose citizens are resilient to episodes of protracted political trauma – it’s the Paris of the Middle East; the branch that always bends but never breaks! The academic narrative of countries like Lebanon is of security, sectarianism and terrorism. What many academics, journalists, and politicians overlook is how public services and social policies – and contestation over them – have shaped people’s lives in Lebanon. There is little understanding about the policy making process and the endemic socio-economic problems such as income and health inequalities that years of state corruption and policy neglect have created. Lebanon is emblematic of where government and market failure have made a nation sick and unhealthy.

The past year has been turbulent even by Lebanese standards. Formal parliamentary politics effectively ground-to-a halt in autumn 2019 in the face of widespread protests at worsening economic and social conditions. The present incumbent, Mustapha Adib, is the third prime minister the country has had since October last year.  The arrival of COVID-19 further exposed the depth of the country’s economic and social malaise, as well as long-standing problems arising from the chronically underfunded, under-staffed and overburdened public health system. As of 17th September there had been just over 26,000 confirmed cases of COVID-19 and 259 deaths had been reported by Lebanon’s Ministry of Public Health.[3]

Our report[4] does not address the impact of COVID-19 in detail because much of our primary research had already been completed by the time lockdown measures were imposed, and properly grounded political economy work should take a longer-term view of relationships between political economy exposures and health outcomes. It is clear that COVID-19 has disrupted the health system, services – and all aspects of life in Lebanon. This grave situation has now been compounded by the explosion in Beirut – as a result of which public health practitioners are anticipating a spike in cases among the health and rescue workers involved in the response. The World Health Organization (WHO) reported that three Beirut hospitals were “non-functional” and an additional two suffered “substantial damage”.[5] Additionally, WHO reported that 55 healthcare facilities evaluated by the agency were “non-functional,”[6] and that 17 containers with essential medical supplies, as well as delivered shipment of personal protective equipment to tackle COVID-19 were destroyed as a result of the explosion.[7] .[8] It is hard to see how an effective response to a public health crisis like COVID-19 can be mounted in such difficult circumstances.[9]

Taking a longer view, the state of Lebanon’s health is even bleaker when it is considered that the country spends between 8-10% of its GDP on health care and treatment which is comparable to many European countries. However, this high health expenditure does not translate into better care, services and improved health for the Lebanese or refugees, even for those able to pay. A major problem is that this expenditure is concentrated in many high-tech-high-cost interventions used by small number of patients suffering from chronic or serious illnesses. It is said that Lebanon possesses more state-of-the-art health care technologies than Germany and Sweden yet lacks the basic primary and preventive health services. In addition, a cartel of medical suppliers who import pharmaceuticals have made millions over the past twenty years. Health and social welfare policy in Lebanon are one of profit and cure rather than access and prevention. Thousands of poor Lebanese and Syrian refugees have died as a result.

In this report we show how the health and wellbeing of a nation cut across religious and political boundaries. They are highly sensitive political issues and as we show, the policy and political structures of the Lebanese health and social welfare system have clearly had a negative effect on the health of a nation. For example, over half the Lebanese population are not formally covered by any health insurance, whether public or private. In a country where 85% of the health sector is private, it costs money to be healthy and recover from illness. Over two million Lebanese cannot realistically afford to go the doctor. Refugees fair even worse. This is a staggering figure which has severe social and economic consequences for establishing a stable state. Multiple attempts have been made by the World Bank, United Nations and European Union to strengthen and reform the Lebanese public health care system but have been met by sclerotic political management keen to bolster the private health care industry from which many politicians have benefited financially.

This report is intended as a living document which will be continually updated given the dynamic on-the-ground events in Lebanon. The report provides academics, journalists and policy makers with evidence and background knowledge on a key public service and public good which has been overlooked but which forms the foundation of any international aid attempts at reforming the Lebanese state and more importantly building a stable, healthy and just society.

We welcome comments and advice on further iterations of this report.

Tweets by r4hcmena
We use cookies to ensure that we give you the best experience on our website. If you continue without changing your settings, we'll assume that you are happy to receive all cookies from this website. If you would like to change your preferences you may do so by following the instructions here. Ok
Go to Top